Shortly after Cooper was caught on camera sitting in the audience next to model girlfriend Irina Shayk, conservative Twitter and Facebook users began to flood the platforms with calls for his boycott.

“I have a list of celebrities that support Socialism I refuse to spend another $ on,” said one Twitter user. “Add this one. Boycott them all.”

The apparent reason for the ire directed at Cooper stems from his portrayal of decorated U.S. Navy SEAL sniper Chris Kyle in the 2014 Clint Eastwood film “American Sniper.” 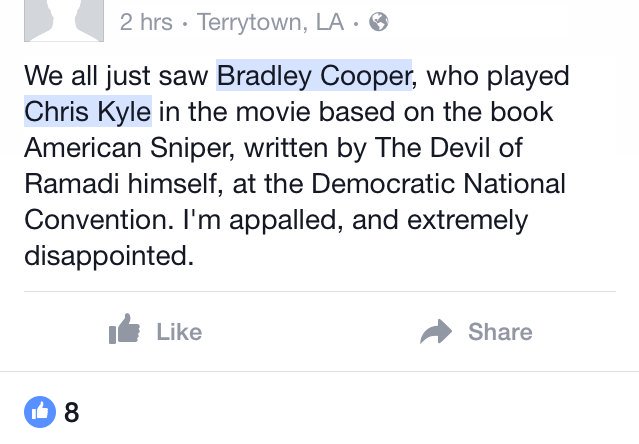 It didn’t take long for the anti-Cooper tide to turn toward mockery, with many pointing out that starring in a movie doesn’t require changing political views.

Conservatives mad #BradleyCooper was at DNC because he portrayed Chris Kyle!!! Does this mean Morgan Freeman isn't really God??? OHNO

When Republicans thought Bradley Cooper was one of them since he's on American Sniper, but they saw him at the DNC pic.twitter.com/OA9Dswo4ON

Web Development by ONCE Interactive ©